Looking at the history of domes in this region, the answer has to be… maybe not.

Just ask people who have lived in Arctic domes about what they’re like.

In 2008 this dome in Bathurst Inlet also sported a small satellite dish. On the right, the kind of houses people now prefer. (PHOTO BY JANE GEORGE)

“It was good for the first couple of years,” Peter Kapolak told me in 2008, as we discussed his dome-living memories from Bathurst Inlet back in the mid-1970s. “Then, condensation formed on the ceiling and dripped down.”

Sam Kapolak, who also lived in one of several domes built in that western Nunavut community, said he didn’t like dome living because the domes lacked insulation,  and ice would form on nails inside. The only advantage of a dome over an igloo was that the dome didn’t collapse in the spring when the ice melted, he said.

Built in 1971, Bathurst Inlet’s domes were replaced by more conventional homes in the early 1990s.

But the metal-clad domes — of which three still stood in 2008 — were the brainchild of the late Glenn Warner, a former Mountie who opened the Bathurst Inlet Lodge in 1969.

Standing inside one of the dilapidated domes, Glenn Warner talks in 2008 about how he got the idea to bring domes to Bathurst Inlet. (PHOTO BY JANE GEORGE)

Warner told me in 2008 that the Government of the Northwest Territories was delighted with the dome house idea, because in 1971 building a dome cost much less than other types of housing units in the territory.

Warner said he wanted to get better housing for the people of Bathurst Inlet, who lived in shacks on the beach, so he went to see Stuart Hodgson, then NWT commissioner.

Hodgson told Warner that he didn’t have any specific budget set aside for social housing in Bathurst Inlet, but could find $27,000 from a so-called slush fund to cover the shipment of construction materials to the community. That’s how the territorial government, minus today’s bureaucracy and legislative assembly, operated in those days.

So, Warner submitted two possible housing designs to the community — one for a “normal” house and another for a dome.

Everyone opted for the domes. These were prefabricated in Alberta and brought north to Bathurst Inlet by a Hercules aircraft that landed on the sea ice. When more new houses were built, the domes were quickly exchanged for boxy one-bedroom units. 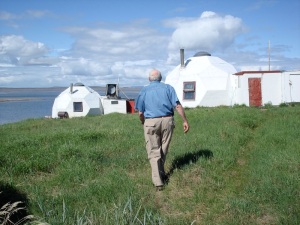 Glenn Warner, who died in 2014 at the age of 80. walks towards two of the three remaining domes at Bathurst Inlet in 2008.

Dome structures became popular elsewhere in the Arctic, too, during the 1970s, mainly because the dome shape resembled that of a snow house.

In the western Nunavut community of Cambridge Bay, there were also domed-homes, built in the dome-home-craze and then torn down in late 1980s. You can seem them in a photo recently posted on Facebook, which prompted a woman to recall that it “would whistle like crazy during winter storms.”

Cambridge Bay domes, built in the late 1970s, but later torn down in this photo by Steve Mercer, posted on Facebook.

In 2009, I was excited to find a dome that was being used as a church in Baker Lake — and others have told me of domes in other communities. 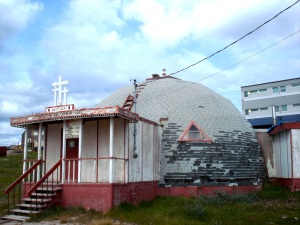 But most of these domes have been torn down, as in the case of the Cambridge Bay domes.

Iqaluit’s blue dome, or “igloo,” was finally demolished in 2006 after being plagued by structural problems.

The $1.4 million blue structure opened amid much fanfare and controversy in 1993, but the building cracked, leaked, sagged and reacted badly to extreme changes in temperature.

The dome served as an office for the Baffin Regional Inuit Association. It also housed the Office of the Interim Commissioner and, after April 1, 1999 and the creation of Nunavut, the dome provided temporary accommodation to Nunavut’s executive and intergovernmental affairs department.

A youth centre that then operated there had to close its doors in 2002 after vandals entered and trashed the interior.

Iqaluit’s Kamotiq Inn, site of many long beer-and-cigarette-infused meetings among Nunatsiaq News staffers during the 1980s and 1990s, was torn down in 2008. Built in 1980, its red dome stood as a landmark at what’s now the traffic-congested Four Corners intersection in Iqaluit. I watched the bulldozer smash into it. Soon, only the sign was left. Farewell to plates of deep-fried maktaaq whale skin and Kamotiq burgers.

The Kamotiq Inn was demolished in 2008 to make way for the Qamotiq commercial-office building. (PHOTO BY JANE GEORGE)

Used to be from inside the “K-Inn” you could admire the lines (‘though somewhat grimy )of the geodesic dome, conceived in 1949 by R. Buckminster Fuller, the early environmental activist who was devoted to “applying the principles of science to solving the problems of humanity.”

Back in the mid-1950s, there was even a plan to put a geodesic dome over Frobisher Bay (now the city of Iqaluit), stretching half a mile in diameter. Because the proposed dome would have blocked out the sun,  streetlights would have had to remain on 24-7, even during the long sunlit days of spring and summer.

In the Nunavik community of Puvirnituq— when it was then called Povungnituk, the museum built in the 1960s, now long-gone. was built as a dome.

Here’s what the museum in then-Povungnituk looked like. I pulled this photo of Facebook, where it was posted by Putugu Nulukie.

Today, you can still find domes around Nunavik and Nunavut, but not necessarily geodesic ones. These include a museum in Inukjuak, a dome in Sanikiluaq and the dome that holds crushed rock at the Meadowbank gold mine in Baker Lake. 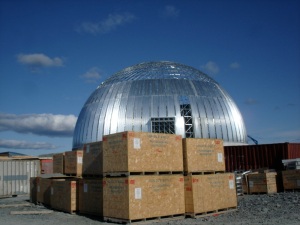 When I visited Agnico Eagle Mines’ Meadowbank mine near Baker Lake in 2009, this dome to hold processed gold-rich rocks was still construction. (PHOTO BY JANE GEORGE)

The Arctic dome-dream hasn’t yet died: a former Pangnirtung resident recently proposed lowering price of food in this Nunavut community by growing vegetables locally in dome-shaped greenhouses. And, at one time, Makivik Corp. hatched a plan to build prefabricated green mini-domes for use by Nunavik hunters. 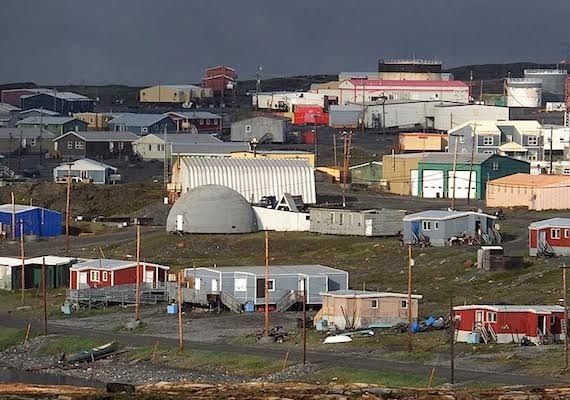 And the drive to find a good fit for domes in the Arctic continues: a company called Inter-shelter says its domes “provide shelter for camping, hunting, military command centers, disaster relief, temporary labor lodging even as a bugout shelter for the doomsday prepper in you.”

The seven natural wonders of the Arctic world

And then there’s the “Like an iceberg” series about my experiences in the Arctic during the 1990s. 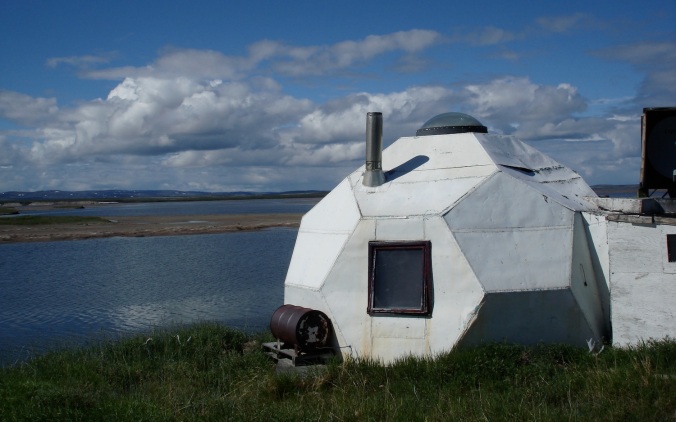 6 thoughts on “Arctic domes for homes: the dream goes on”