Where did the time go? Since the beginning of March to now there has been one story in my life: COVID-19.

Here are all stories I wrote for Nunatsiaq News, which I am putting here as a reference as much for myself as for anyone else who is interested in the infection, or fear of the infection, throughout Canada’s North. It’s affected the entire region: people, education, travel, mining…

At a later time, I will probably organize these stories by themes. But for now, you can follow my reporting about COVID-19 from the bottom to top along with some of the photos I posted on Twitter.

The cold and hot spots of COVID-19 in North America

Canada moves to bar most pleasure craft from Arctic waters

Baker Lake’s Abluqta Society sends out food for the hungry

Western Nunavut eatery reinvents itself to survive the pandemic

Lost your job due to the pandemic? Quebec housing corp. to help with rent

Aurèle St-Amant, a pioneer of Nunavik’s co-op movement, dies at 83 from COVID-19

School’s out in Nunavut, and one mother says the kids are alright—most of the time

Migratory geese and ducks are free of COVID-19: researcher

In Cambridge Bay, schools reach out with activities and food

Food for the hungry in Cambridge Bay

Nunavik’s Raglan mine reopens despite outrage from Makivik Corp.

Feds announce millions to help the North deal with COVID-19

Under Nunavik’s COVID-19 lockdown, only charter flights travel to the region

If COVID-19 strikes, this Nunavut community is ready

Creative SocialDistancing: many Nunavut residents have been getting outside and using snow to make great sculptures. This colourful drummer by Bernard Walsh of Cambridge Bay.

COVID-19 could have big implications for Nunavut’s mining industry

Remarkable #COVID19 generosity: Erik Hitkolok of Kugluktuk filled his sled with more than 200 frozen white fish and went on social media to offer them to people in his western Nunavut town. 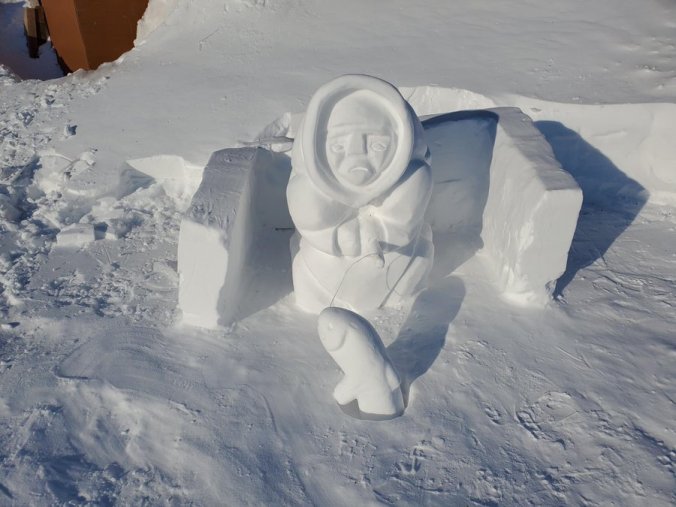 SocialDistancing during COVID-19 pandemic: Thomas Akilak won this weekend’s snow sculpture contest in Baker Lake, Nunavut: “It is important for us as a community to remain physically active and now that the weather is warming up we can enjoy time outdoors,” the hamlet said.

Nunavut mine goes into “lockdown” to reduce risk of COVID-19 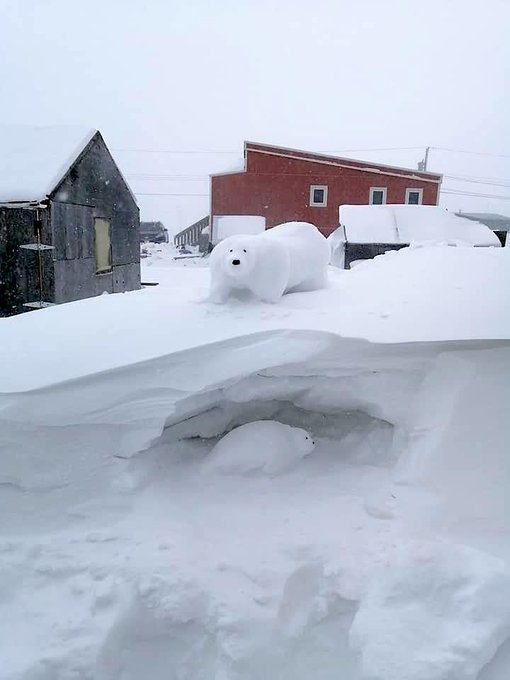 A terrific snow sculpture from Arviat, Nunavut where the hamlet organized a community-wide competition to get everyone out of their houses, respecting COVID-19 social distancing: here a large owl by Thomas Aniksak and a polar bear over a seal hole by Angie Curley.

Baffinland continues measures to keep COVID-19 out of Nunavut

Nunavik’s Raglan mine plans to send northern workers back home

Love this bunny by the family of Jeannie Evalik in Cambridge Bay, Nunavut. 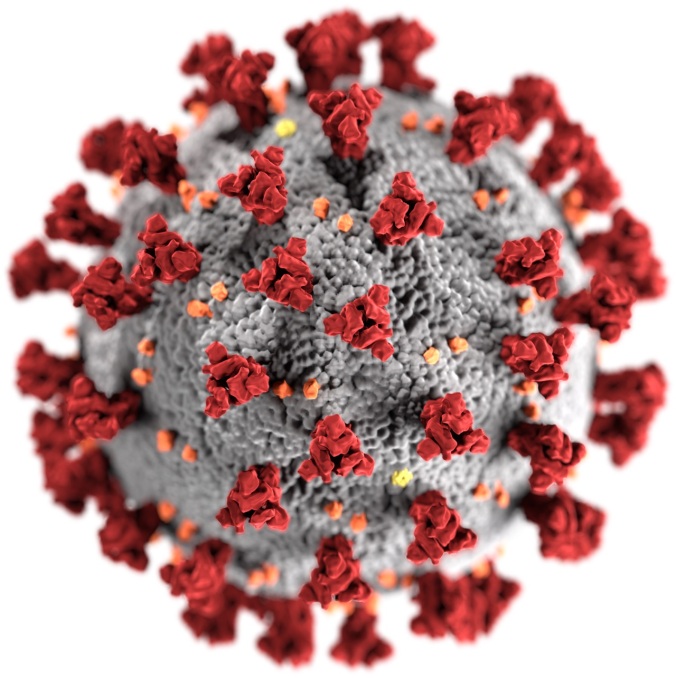 I am already in my bed in Cambridge Bay, Nunavut on Sept. 30, with a book, when my friend runs in and says “they’re out.” I know what she means and throw on my parka and kamiks and we head out down the road towards Mt. Pelly. We stop before the bridge and step out. Huge pulsating swaths of green light are moving across the sky, curling and reforming.

The most amazing sight: the stars, like a blanket behind the green light. How would I feel if I could see that every night?

I spend some of my spring watching the ducks as they meet on the lake where I live in southern Quebec. There are so many kinds, some of which are already familiar to me from the North: loons, buffleheads, common and hooded mergansers, Canada geese.

Sometimes the ducks form a line and race back and forth across the lake after the ice melts. The water is frothing behind them. I watch them for hours. They are just having fun. In my next life, I want to be a migratory duck.

In the North, I watch the snow buntings and redpolls. This photo shows two birds at the feeder at the same time. That only happened once when both the birds were hungry.

Moving from north to south I see the ice break up and freeze over and over again. In April I see the melting ice under a bright red sunset at the lake.

Then, again on June 8, it’s about midnight when the melting ice in Frobisher Bay turns pink. 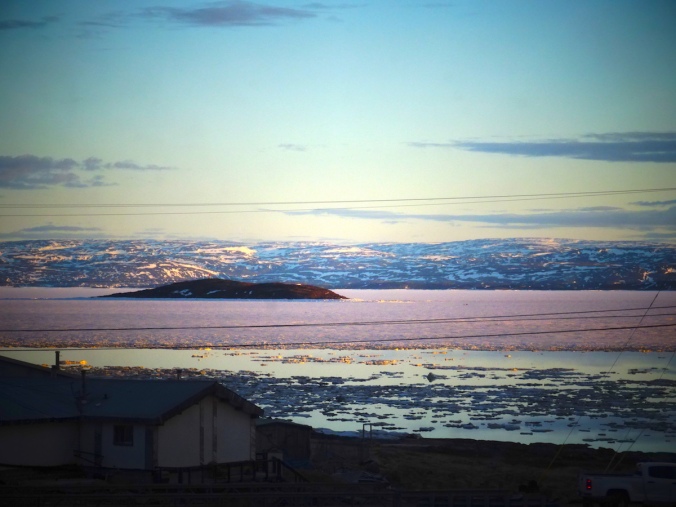 In the autumn I watch ice form in Cambridge Bay producing frost flowers.

Then, again, back by the lake, it’s freeze-up again. This time, the island looks like it’s ready for Christmas. 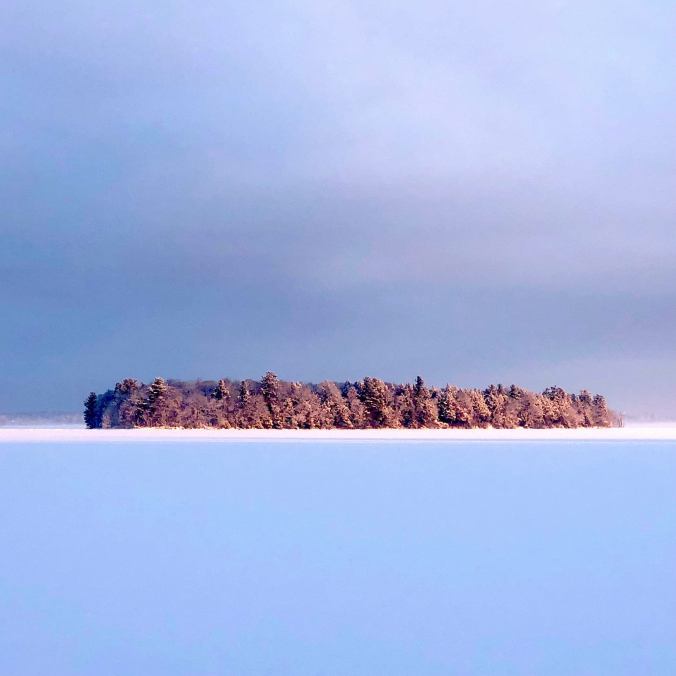 I go to Mt. Pelly near Cambridge Bay in September with a friend to her cabin. We’re lucky because it’s warm enough to walk around on the half-frozen land. Only later we learn about the big grizzly bear that’s out and about in the vicinity at the same time.

When I’m not in the North, I spend a lot of my time off-grid in my island cabin.

Here I am at the Legion in Iqaluit on a tired Friday evening in April, at the left, with a group of my former co-workers. At that moment, we have no worries. 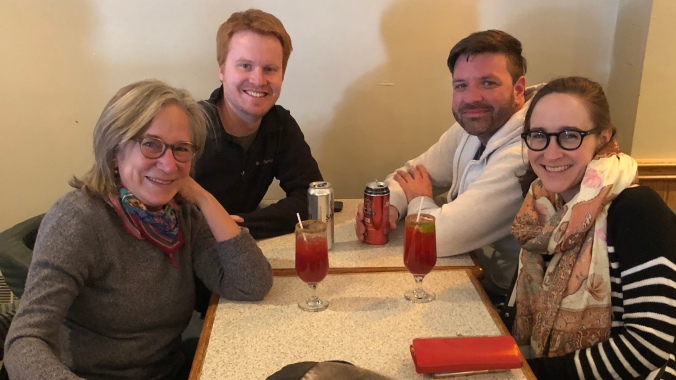 Sometimes a good meal can make everything go smoothly. One day in Iqaluit, in June when I am recovering from a bad cold, I get two portions of the best sushi I’ve ever tasted, of Arctic char and caribou, at the Nanook food truck in Iqaluit.

A friend in Cambridge Bay makes us a flight of drinks one night.

And how about the neighbour’s fish? Who needs a freezer in Cambridge Bay?

I am finally planning on taking a weekend off when the Government of Nunavut is hit by ransomware on Saturday, Nov. 2. On that day, I am not even sure what that is, but, from then until the end of December, I go on to write maybe 20 stories for the Nunatsiaq News about its impact on the GN, on social assistance recipients and on the delivery of health care. 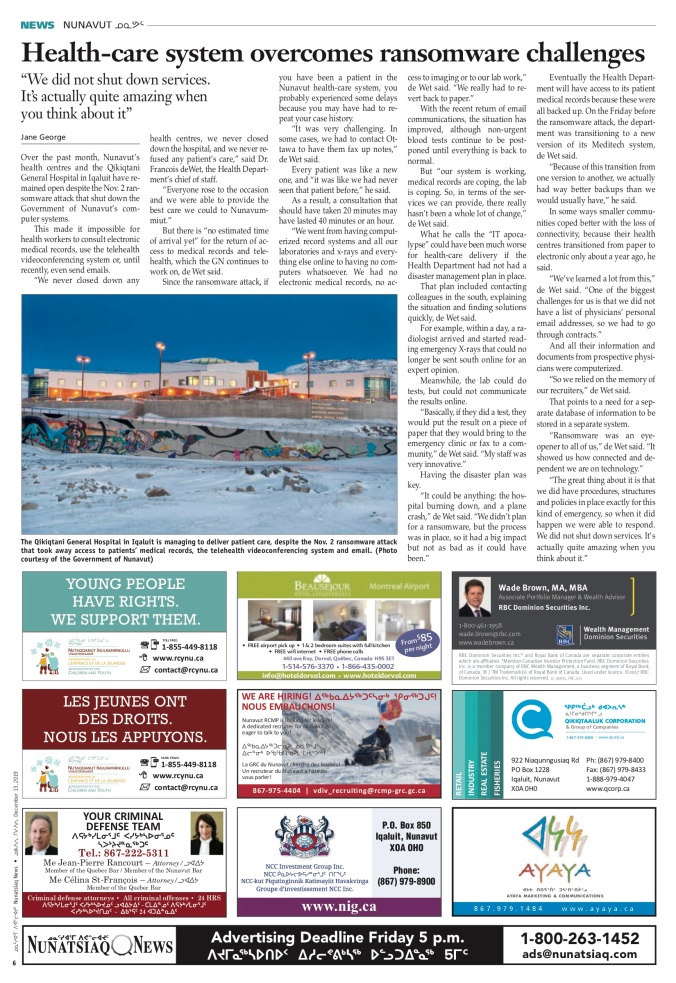 It’s been six years since I started this blog, and I’m sure many who end up here have no idea about a series about my experiences in the Arctic in the 1990s, which I wrapped up in the spring of 2013.

In Like an iceberg, I talk about an exorcism, brain surgery with a hand drill, robins in Iqaluit and a visit to the High Arctic’s fossil forest — as well as some big issues like censorship of the press, sexual abuse and violence.

There are also many photos you won’t see anywhere else…

So, here are all the links — and relive those times with me.