A debate on social media over the appropriation of Inuit throat singing—and the larger issue what constitutes of intellectual property—continues.

That’s despite an effort by the American vocal group Roomful of Teeth to diffuse a dispute over throat singing use earlier this week.

A statement they issued Tuesday did not have the desired effect on their Inuit critics who still accuse them of cultural appropriation.

Tagaq and other Inuit women, including filmmaker Althea Arnaquq-Baril, continued to post comments on Twitter, after they had read the group’s Oct. 22 response to their earlier criticism about the composition, Partita for 8 Voices.

In this composition, which has received Grammy and Pulitzer awards, throat singing, or katajjaq, can be heard.

They said the statement from Roomful of Teeth missed the point: that throat singing, which comes from a long oral tradition among Inuit women, belongs to Inuit as part of Inuit intellectual property rights, which the World Trade Organization defines as “the rights given to persons over the creations of their minds.”

Arnaquq Baril said on Twitter that while the statement from Roomful of Teeth contained some well-worded thoughts, it was “followed by zero commitment to stop performing one of the most famous and beautiful Inuit throat songs ever.”

In their statement, Brad Wells, artistic director, and Caroline Shaw, singer and composer, both from Roomful of Teeth, said they studied with master singers and teaching experts to learn new styles.

Some styles were specifically culturally-rooted, katajjaq, Tuvan throat singing, Korean p’ansori, and others were less so such as yodeling, belting, death metal singing, they said.

“In all cases, the intent is not for the Roomful of Teeth singers to become expert performers in any of these styles—or even to literally perform these styles in our music—but rather, in the process of learning to move the voice in widely different ways, to open up new sound possibilities as we build our repertoire,” they said.

In 2010, Roomful of Teeth invited (with compensation and travel, lodging and expenses covered, they said) Nunavik throat singers Evie Mark and Akinisie Sivuarapik to the group’s summer residency at the Massachusetts Museum of Contemporary Art in Northampton, Mass.

In a performance program, the Nunavik throat singers were acknowledged as “vocal coaches.”

“We learned what we understood to be basic katajjaq techniques. We also learned about the genesis and purpose of these techniques and aspects of the Inuit culture,” Wells and Shaw said.

“As we began to construct music informed in part by our study, we included some katajjaq patterns (as we understood them.)”

They said they understood their music “nested in these patterns to be sufficiently distinct from katajjaq to constitute something new.”

“But thanks to the many voices we have heard in the past two weeks we understand that we cannot be the arbiters of that distinction. We have work to do,” they said.

And they promised various steps to recognize and support Inuit and other indigenous contributions.

But Tagaq said that wasn’t enough because the third movement of Partita for 8 Voices is entirely based on the Inuit throat singing piece, “the Love Song.”

“The Inuit who taught you that song are the composers of that section of your piece,” Tagaq said in a long thread on Twitter. “Intellectual Property is real. Do you understand this? Why are Indigenous songs reduced to mere gibberish and/or vocal techniques?”

Also followed by zero commitment to pay the Inuit artists and composers they ripped off. And NO. They did not just learn vocal techniques from them and go in to create new pieces of music. They straight up ripped off the exact song they were taught.

Tagaq, said Roomful of Teeth didn’t cite any concrete ways their “teachers” would be compensated.

“I just would like to see people credited and paid. I want us as Inuit to be able to feed our babies and pay rent by having our songs known as what they are,” she said.

Tagaq remained critical, as well, about the Roomful of Teeth’s promise to acknowledge Inuit.

“So you will read aloud before every show that you are appropriating songs? Or will you just speak of Inuit being generous or give an anthropology class at the top of the show,” said Tagaq, who, like some other commenters online, suggested future proceeds from Partita for 8 Voices could go to a charity that focuses on helping Inuit artists.

You can read more in an updated story on Nunatsiaq News.

After tallying up a record number of visitors, more than 9,000 over five days, Norway’s 28th Riddu Riddu Indigenous festival wrapped up in the early hours of this past Sunday.

“The festival has surpassed my wildest fantasies,” said festival manager Sandra Márjá West in a release.

The outdoor stage at Riddu Riddu 2019, which this year saw a record number coming to the festival in northern Norway. (Photo courtesy of Riddu Riddu)

“I am happy that so many people would go to Riddu Riđđu this year,” West said.

I wasn’t at Riddu Riddu to watch the festival unfold, but sitting 5,200 kilometres away at my at off-grid island cabin: I had made no plans for July other than to watch the eagles roosting and see my family.

But then suddenly, thanks to social media, accessible now on my phone,  it felt as if Riddu Riddu was taking place close by, and I wished I could just step off my boat and be there.

Riddu Riddu means stormy wind off the water in the Saami language, and had I been at the festival I would have dressed warmly as I could see that my Saami friends wore light parkas over their gáktis during the evenings.

Every year, Riddu Riddu reaches out to other circumpolar regions and indigenous peoples to spotlight the music, art and culture from a northern, Indigenous people.

And this year, its featured Indigenous northern people of the year were the Inuit of Nunavut.

The line up of performers from Nunavut included, among others, award-winning Tanya Tagaq and Silla and Rise.

Images of the North is a collaboration between three amazing young artists from #Sapmi and #Nunavut Hilda Länsman, Alexia Galloway-Alainga and Mio Negga commissioned by @Riddu for this year. pic.twitter.com/ZsirVRp1iA

Tagaq, who has appeared at Riddu Riddu several times, also read to festival-goers from her new book, Split Tooth, which I reviewed for Nunatsiaq News.

.@tagaq reading from her book Split Tooth here at #riddu – to a mesmerized audience. A wonderful quote from one the audience sums it up: I have lived a long life, but you Tanya just gave me a new one! #indigenous #Inuit #Nunavut #CanadaNorway pic.twitter.com/gq6CxZwucb

Back in 2004, Riddu Riddu’s Indigenous people of the year were the Inuit of Nunavik.

They came after, in 2003, I had first gone to Riddu Riddu with two throat singers from Nunavik, who performed under the name of Puppuq.

After that festival, I had headed south into Finland with a busload of Koryaks, members of Mengo, a 21-member dance and theatre troupe from Kamchatka in Russia’s Far East.

The Koryaks, 6,600 of whom live in Kamchatka, were Riddu Riddu’s northern people of 2003, arriving at the festival with boiled reindeer meat, broiled salmon and fish cakes.

I can’t remember how we communicated about where they should let me off, but their bus left south of Oulu where I spent a week with friends at their island cottage, immersing myself again in Finnish.

In 2006, I was back at Riddu Riddu, when the program showcased everything from polar ska, Ainu dub, tribal funk to ethno-futuristic rock played by groups from Norway, Russia, Japan, Brazil, Siberia, South Africa, Greenland and Alaska. I hardly slept. 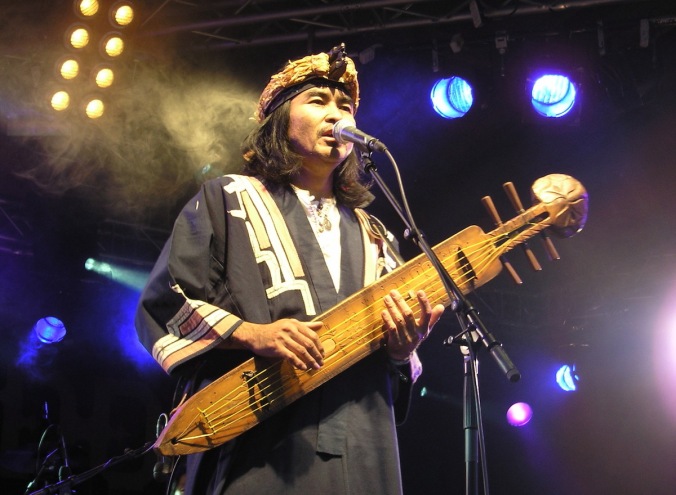 I stood in front of the Riddu Riddu stage late into the night, listening to Oki, an Ainu from Japan.

Members of the Siberian group Ayarhaan, as seen at Riddu Riddu in 2006. (Photo by Jane George)

And then there was the Siberian group Ayarhaan, which means “the tribe of the creator” which took the festival by surprise with its wildly traditional music combining elements of traditional throat-singing and Jimmy Hendrix.

Their home, Yakutia in central Siberia, is a place where temperatures range from -40 C in winter to 30 C in the summer, an extreme sort of place that produces an extreme version of throat singing.

“To survive you have to be strong, so you can hear the strength in the music,” Albina Degtyareva, the group’s lead singer, told me. “In Yakutia, you can feel and hear the power inside you.”

Her mouth harp, or “khomous,” looked like a pair of scissors with a metal tine sticking through the middle. Yakutians traditionally used the khomous, which was said to have been made by gods and possess a magical voice, to accompany their throat-singing. But Degtyareva said that 20 years ago, only 10 people in Yakutia knew how to use the khomous.

Raised in a small village, with a family where the harp was still played, she said she was one of only two people in Yakutia who felt confident enough to teach others how to play.

(And playing the khomous certainly isn’t easy: you have to learn how to make the separate oo-aa-ay-e sounds and then vary them by using your tongue. At the same time, your hand has to stroke the harp in a certain way, moving it back and forward, “like dancing,” slowly or fast, depending on the desired sound. It’s the kind of music someone has to teach you personally — and that’s what Degtyareva and her two partners did in workshops at Riddu Riddu, showing an interested group how to produce basic sounds on the khomous.)

For me, going to Riddu Riddu was an inspiration and an affirmation of strength and cultural and linguistic unity which I had always felt throughout the Arctic—and so it seemed this year for some of those at Riddu Riddu.

Today I ate natsiminiq, minke whale chilli, and danced to Inuktitut music all the way in Norway. How lucky I am and how happy I am to be Indigenous. Giitu Riddu Riddu ❤️ I love you Sapmi.

To see more photos from Riddu Riddu look at their Facebook page.

And, if you haven’t already, take a look at my “Like an iceberg” series of posts  on being a journalist in the Arctic in the 1990s.