Too much news, too little time.

So all the thoughts and energy I had went into writing news for Nunatsiaq News: the visit of Prime Minister Justin Trudeau, the Nunavut legislature’s sitting, a regulators’ meeting on oil and gas development in the Baffin region, a Nunavut-wide conference on language, a lost teenager on the land, the death of the legislature’s Speaker and a mining symposium.

Nothing like a March blizzard to remind you where you are, a place that took PM Trudeau two days to get to. I almost got marooned at the office by the sudden storm the day he was supposed to arrive but managed to make it to my co-worker’s apartment where we made do on a variety of snacks, some frozen chicken and a bottle of wine. The next morning I washed my clothes so I would be clean for the PM’s visit.

Then a couple of days later I look out the porch and see these amazing clouds at sunset. They look like giant birds.

Let’s not forget about the ice down the street. 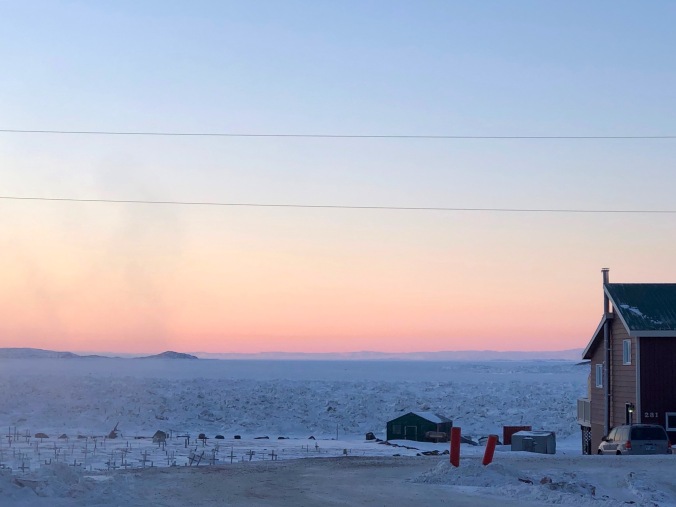 You will note the exhaust there which is from my vehicle which was warming up. The sunset colours were amazing and the power lines in front of the view are a fact of life.

Suddenly one morning I know spring is coming when the rocks are visible under the snow.

I see this huge polar bear skin being stretched. With the (ugly) coloured building in the background, it just speaks to how Iqaluit is today.

Happy April 1! Nunavut is 20 years old! I’m happy to watch the fireworks with an old friend by the ice. 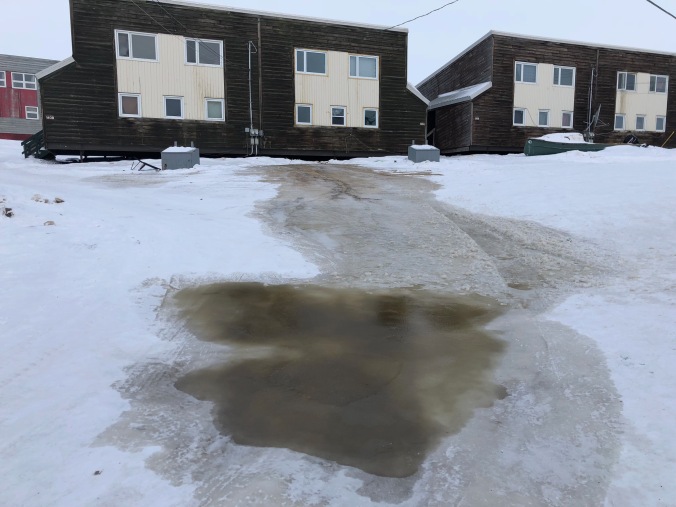 Saving the worst for the last. I note this flow of sewage in the neighbourhood I’m in. For me the worst is that I fall suddenly ill that same week with a water-related illness. I haven’t boiled my water enough or something. That caps off my month of photos! On to the end of April and beyond!

If you don’t feel like cooking—or simply want a break from facing the high grocery prices in Canada’s North—you at least have some options in Iqaluit. In Nunavut’s capital city, in comparison to other places in the territory,  you can find a fairly large choice of restaurants.

For some reason during the past month, maybe because it was colder than usual ftom May into June, I felt focussed on food. That led me to encourage local chef Sheila Lumsden to prepare a variety of Arctic foods, from muskox to Canada goose,  for a story in the Nunatsiaq News.

But  when the Nunavut legislature went further into its spring sitting, and I was often too tired to think about serious food preparation, I started to sample the various restaurants around town, looking for the best deals at the lowest price possible. I aimed to spend no more than $30.  I found many of these take-out meals were “desk-worthy” as well, that is, easy to eat while I continued to work.

Here are my top finds:

“Mamartuq”- yummy read words under the polar bear on the side of the Nanook Express truck, parked in front of Nanook elementary school.

• Nanook Express food truck: When I stopped off there to buy my take-out meal, it was mainly because the idea of caribou bulgogi with rice and spicy cole slaw along with a turbot taco sounded pretty good. The caribou worked well with the sauce, in case you’re wondering!

At $24 for the two, bulgogi and taco, this was by far the best and cheapest meal I found.

• Yummy Shwarma (as seen below):  The pizza, falafel, humous and stuffed vine leaves I ordered at various times from Yummy Shwarma were so tasty that they disappeared quickly. I didn’t take any photos. When I went in one evening, Khldoun El-Shamaa, who owns and operates Iqaluit’s first (and only) Lebanese restaurant, offered me a huge portion of salad with chicken, so much it lasted me for three meals. 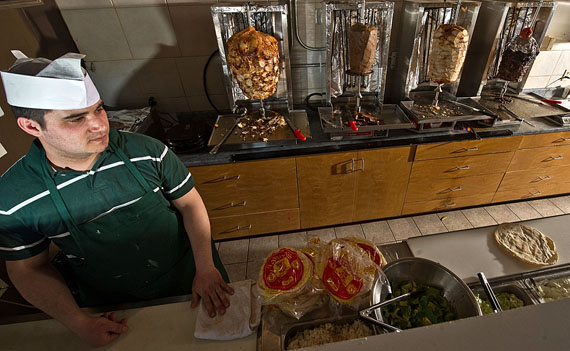 • The Snack: While you can spend a lot of money here on things like poutine and soda pop, one of the best lunch deals in Iqaluit has to be its generous chicken sandwich, made with fresh meat, all for about $10.

• The Iqaluit Country Foods Store: You can buy a piece of dried Arctic char or smoked Arctic char for under $30 and count on eating well for more than one meal.

• Friday night steak at the Legion: Again, for that magic price of $30, you can get a good steak, heaped with onions and mushrooms, served with vegetables and a baked potato  and relax in an unpretentious environment (with a glass or two of wine.) 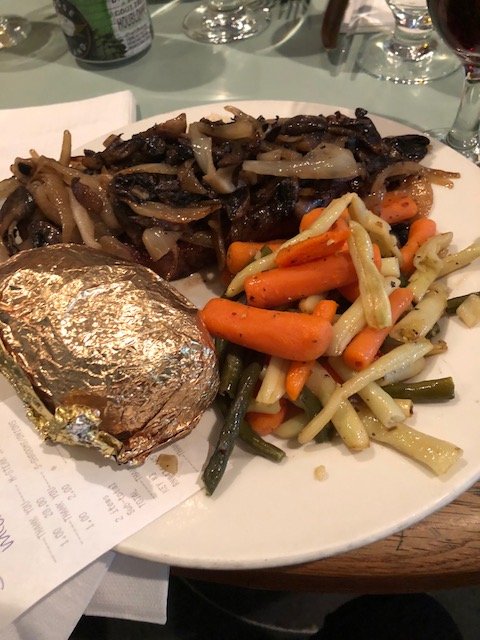 • Or if you have money you can go to The Discovery Inn and spend several times more than $30 on a meal: It’s expensive but the meal I ate there was great, a beef loin with spicy chimichurri  sauce and vegetables.

If you’ve been wondering about the image of the ice-floe lights which is my featured photo with this post, it’s the ceiling decoration at the Discovery Inn.

If you have input on reasonable and good meals that you’ve had in Iqaluit, please send me a comment!

In writing this post, I don’t want to sidestep the widespread hunger in Iqaluit, where the majority of Inuit don’t have enough to eat.  The city does have a soup kitchen and a food bank, and they need our support: you can read more about the soup kitchen here.