As the days went on, some delegates on Governor General Adrienne Clarkson’s 2003 state visit to Finland and Iceland, started to worry about their weight. Not me: I ate little, drank nothing and concentrated on collecting a stash of the organic chocolate bars that were handed around the airplane after meals so I could take these home as gifts. 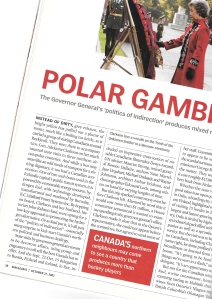 I patched up things with Sheila Watt-Cloutier, then the president of the Inuit Circumpolar Conference (now Council), who was worried I’d somehow portray the presence of Inuit on the trip badly in my stories.

But because I was the only journalist on board, my presence also sparked a perceptible unease amongst Canada’s royal envoys — with John Ralston Saul, Clarkson’s husband, coming back to chat me up on the airplane, to quietly sound me out on how I had found the state visit.

While I toiled to finish my Maclean’s piece (due while I was in Iceland) and to meet my relentless Nunatsiaq News deadlines, I managed to fend off all other pressures — after all, I had experienced much worse in Nunavik.

But I also missed out on many opportunities during the state visit: for example, a lunch in Iceland where my table companions included noted photographer Ed Burtynsky and author Jane Urquhart. However, instead of talking to them about his art or her writing, we were obliged to make small talk with the other person at the table, the local mayor’s wife.

I attended only one or two of the many concerts or art exhibits which were included on the agenda as I tried to meet my deadlines.

And, much to my regret now, I don’t even remember meeting author and fellow delegate Wayne Johnston, whose books I continue to read.

However, while travelling on the airplane from point A to B, I did talk to the wild salmon marketers from B.C., Ontario wine producers and an architect from Toronto. Most of them weren’t even sure why they were asked to be on the trip.

And I also passed the time with many of the academics who had with an interest in the North, among them, François Trudel from Université Laval, Peter Johnson, then chair of the Polar Commission, and Shelagh Grant, author of many northern histories.

However, in my professional coverage of the trip, I managed to leave out its many high points for me (as a person, not a journalist) — which I still recall today:

You might wonder why a glass jar with a silly algae ball somehow still sums up that 2003 state visit for me.

But you just had to love those “lake balls,” the strange, ball-shaped algae called “kúluskítur,” or “balls of shit” in Icelandic, or “Cladophora aegagropila” in Latin, which only exist in two lakes in the world: Lake Akan on Hokkaido Island in Japan, and in Myvatn.

Seeing those algae balls made up for all the frustrations and fatigue of the 2003 junket and made me smile— who could ask for more? 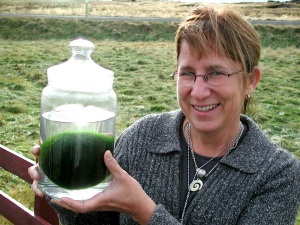 I hold a jar with an algae ball from Lake Myvatn, Iceland. (PHOTO BY JANE GEORGE)

You can read earlier instalments of A memorable junket here:

Remembering a memorable junket: Siku girl’s 2003 travels with the GG

Remembering a memorable junket, Part III: Siku girl travels with the GG in 2003

Did you miss A Date with Siku girl’s Like an iceberg? You can read it all here: