More than 100 years after Norwegian explorer Roald Amundsen successfully traversed the Northwest Passage in 1905-06, there’s a new kind of sailor eager to accomplish that iconic voyage: the cruiser.

In 2014, five cruise ships — albeit some looking more like icebreakers than luxury liners — stopped by the western Nunavut of Cambridge Bay, where I’m staying this month, to start or finish their trip through the passage.

To see what kinds of well-heeled folks travel on those trips, which can cost $7,000 USD and more, I tracked a plane load of more than 100 passengers who arrived in the town of about 2,000 people to set off on their Adventure Canada trip through the Northwest Passage.

After landing Sept. 8, they spent an afternoon in the community, participating in activities led by Vicki Aitaok, who’s organized similar visits for several years.

Jessie Tologanak tells a group of cruisers about the legend of Mt. Pelly, seen in the distance beyond. (PHOTO BY JANE GEORGE)

My group of cruisers set off to walk around town with Jessie Tologanak under sunny skies, heading down the muddy main street, past the hamlet office, the health centre, St. George’s Anglican Church and the visitors centre, down to where everyone could see across to Mt. Pelly, the 200-metre-high esker located 15 kilometres outside town.

“We call that Ovayuk,” she said, pointing to Mt. Pelly, relating the legend of how a starving giant laid down and died there.

Inuit legend says that Ovayuk and two smaller hills are a family of starving giants who were crossing Victoria Island looking for food.

“His bladder burst and that’s water you see there,” Jessie said, pointing to the bay. 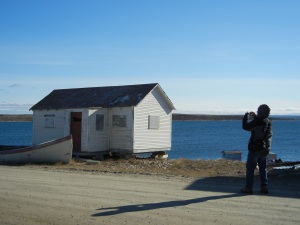 A cruiser takes a photo of an old Hudson Bay Co. building. (PHOTO BY JANE GEORGE)

Visiting Nunavut and Greenland, where the cruise would end Sept. 22, is different from visiting Antarctica, a woman told me as Jessie spoke. That’s because there were only penguins in Antarctica, she told me — no people or communities.

Many in the group wore jackets from those trips marked “Antarctic,” and nearly all said they had been to the North before, to Alaska, Yukon or the Svalbards.

And, while I expected to find an elderly bunch of people, this gang was fit. Although I saw at least one hearing aid, these men and women didn’t appear to have any difficulties.

“You’ll find a well-travelled group here,” an Adventure Canada organizer told me. “It may be a trip of a lifetime to go through the passage, but they’ve been to lots of other places before.”

And the cruisers had researched their destinations and voyage beforehand. A woman told me how Adventure Canada had first cancelled the trip she was to embark on. That’s because the ship slated for this cruise, the Clipper Adventurer, which spectacularly ran in to a shoal near Kugluktuk in August 2010 during a previous Adventure Canada cruise, had broken down.

And it was only at the last minute that she and the other passengers had been offered a chance to travel on the Akademik Sergey Vavilov, docked outside Cambridge Bay.

That the vessel is a Russian-run and registered ship, previously used to carry out Russian research, wasn’t something you read widely, she said — instead it was redubbed “The One Ocean Voyager,” during on a previous cruise.

That’s when its crew and passengers with One Ocean Expeditions and the Royal Canadian Geographical Society participated in Parks Canada’s effort to locate HMS Erebus and HMS Terror, the ships lost on Franklin’s 1845 expedition.

“I guess Harper didn’t want to be seen as using a Russian vessel on his Canadian mission to find the ships,” she said. (Harper announced Sept. 9 the discovery of one of Franklin’s two ships)

Cruisers take in the exhibits at the May Hakongak Community Library and Heritage Centre. (PHOTO BY JANE GEORGE)

We continued back to the Kiilinik High School where there was time to peek into the May Hakongak community library and heritage centre before the start of a cultural performance, which included a qulliq lighting, local throat singers, drummers and dancers, and music from blind musician Ashlee Otokiak.

Then they walked off down the hill to the bay to board the Akademik Sergey Vavilov on zodiacs.

But given the heavy ice conditions in the Northwest Passage this year, a passenger joked they could be back in Cambridge Bay next week.

“But it’s the trip, not the destination” — Kangerlussuaq, Greenland — that counts, he said.

Keep a look out for future posts from Cambridge Bay in A date with Siku girl.