A date with Siku girl

Wouldn’t it be great if everyone in the circumpolar region could understand each other without translators or interpreters? At least one linguist thinks that may have been the case about 20,000 years ago.

Michael Fortescue, a linguist and expert in Eskimo–Aleut and Chukotko-Kamchatkan, believes that a group of people, all speaking a common language that he’s dubbed “Uralo-Siberian,” then lived by hunting, fishing and gathering in south-central Siberia (an area located roughly between the upper Yenisei river and Lake Baikal in today’s Russia, as shown in the map). 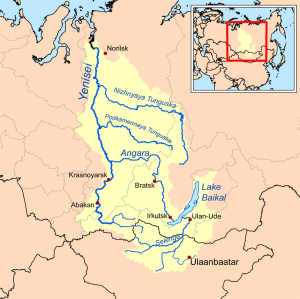 The area between the Yenisei River and Lake Baikal in central Siberia where early residents are thought to have spoken a common language called Uralo-Siberian that gave rise to Saami, Finnish and Inuit languages.

There, families whose migrations were ruled by the coming and going of glaciers during the Ice Age moved northward out of this area in successive waves until about…