Despite the stories about violence and abuse that I often had to report on from northern Quebec, I liked Nunavik and its people. I liked their warmth and the way they joked and teased.

They were generous with their time and energy. When I landed in communities, people took me into their homes. I was invited over for meals. I went berry-picking with friends in the autumn.

Like Inuit, I was rarely lonely or even alone no matter where I was. I walked along the streets and people aome up to me and shook my hand, smiling. “Here you are,” they would say, even if they hadn’t seen me in months.

My northern environment might not have been the one that Peter Murdoch first encountered in the 1950s, but the people I met still  displayed many of the same qualities that drew him there.

George Koneak from an interview with Isuma TV.

In 1998, elder George Aqqiqiq Koneak of Kuujjuaq (now deceased,) one of the first political spokespersons for Inuit in northern Quebec, shared with me stories about the Christmas in the old days.

Aqqiqiq or “Ptarmigan,” as everyone called him, told me about how he missed his first Christmas by a few days because he hadn’t been born yet.

On Jan. 3, 1931, his parents were traveling back to their inland camp by dog team after holiday celebrations at the Hudson Bay Co.’s trading post near today’s community of Quaqtaq, when his mother suddenly felt the onset of labour. They stopped and hurriedly put up a snow house.

“I was born maybe a half hour after the igloo was built,” Aqqiqiq said.

When he was a child, his family always traveled at Christmas time back to the post from their camp near Diana Bay, an inlet on Ungava Bay, he said.

More than 200 Inuit from the nearby camps would gather there, building temporary snow houses for their holiday celebrations. These began in earnest on Christmas Eve, when the Hudson Bay factors treated everyone to a feast, then dancing to accordion music.

“The feast, it was pork and beans,” Aqqiqiq said. “They would make a big batch of pork and beans, lots of bannock, with lots of raisins in the bannock. When the dance would come around in the evening, everyone would fart!”

At midnight the festivities paused for a church service. Gift-giving, Aqqiqiq remembered, was also part of the holiday, but not as formal as today.

“People were giving something, but nothing new,” he said. “Older people would make sealskin lines [for use in dog teams] and packs. Some people would trade jackets and parkas. [There was] Nothing new, coming from the store, and wrapped up in fancy paper. There was nothing to wrap it up with.”

When Aqqiqiq moved with his family to Old Fort Chimo — now Kuujjuaq — in 1958, he was introduced to another way of celebrating the holiday, with lights, decorations, trees and wrapped gifts.

“When I wrapped my first present, I was really proud of myself!” he said. “You had to sleep first, then get up at one o’clock and do the wrapping on Christmas Eve.”

In 1998, Aqqiqiq usually received socks and mittens and other articles of warm clothing for gifts.

“My wife, she was able to make parkas, eider down parkas,” he said. “We collected it in the summertime, and she kept it in bags and cleaned it, taking out the dirt and grass and feathers.”

There was a church in Old Chimo where religious services were held on Christmas Eve and Christmas Day. This church was later moved to Kuujjuaq, where it still stands.

Back in Old Chimo, as in today’s community of Kuujjuaq, games were an important part of Christmas, with indoor and outdoor games as well as dog team races. Aqqiqiq said he found the prolonged Christmas celebrations and exchange of gifts, standard these days, a bit overwhelming.

“Christmas presents today are fantastic. There are expensive ones, could be a ski-doo, could be an outboard motor.” he said. “We’re spoiling our kids now, and that’s not our tradition.”

He also said he regretted that alcohol had become a part of the community’s celebrations.

“I’ve been reluctantly abusing alcohol myself. It’s too much. It’s gone too far right now,” he said. “It’s okay to take a little bit, but not every night. Sometimes booze doesn’t make you happy. My parents drank only very seldom. Sometimes they were given a bottle of home brew. They’re celebrating every day now!”

“There’s a lot of differences,” he said. “I’ve touched the beginning and [how it is] right now. I’ve felt the difference between those sealskin lines and a skidoo at Christmas.” 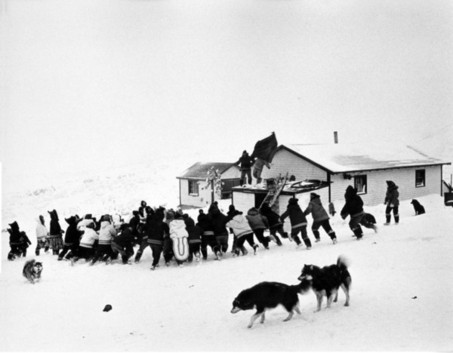