In August, 1998, I travelled again to Inukjuak, that community of about 1,200 on Quebec’s Hudson Bay coast, to observe a week of traveling court proceedings. As it turned out, I arrived luggage-less on Air Inuit, my bag having gone somewhere else — and no one knew where.

In August, it was still warm. The dust came off the streets and hung over the village in a cloud. In the 1950s, Inukjuak, which was then known as Port Harrison, was mainly meadowland — in summer, at least — and there were just a few buildings — a school, a Hudson Bay Co. trading post and a church. In summer, it was a lush place, with a beautiful beach.

But in 1998, all-terrain vehicles raced up and down the streets, all day and night. There were scores of houses, two new schools and two stores, the Northern and the co-op, where I tried to buy what I needed for the week: a hairbrush, toothbrush, toiletries and a couple of shirts, socks and underpants.

My days were simple, too: court in the morning, court in the afternoon and sometimes even during the evening. Court took place in a stuffy upstairs meeting room at the local vocational school.

The cases heard that week were typical of those I reported on: terrible tales of child sexual abuse in this close-knit community where children should have felt safe, but often weren’t.

Every morning Inukjuak’s school bus driver would pick up a little girl. She was the first to get on the bus and the last to get off, but, for her, going to school wasn’t a comforting routine, but a recurrent nightmare.

That’s because her school bus driver was also an abuser who sometimes even fondled her on the bus. From the time she was eight years old, he started to molest her, touching her breasts or genitals, even reaching full sexual intercourse on several occasions.

“He used his position as a bus driver to have uninterrupted time with her,” said Judge Donald Bissonnette of Quebec’s travelling court before sentencing Jobie Ohaituk, then 51, also a well-known soapstone carver, to two years and three months in jail.

“There are no words to describe the shame, loss and pain that this child suffered. It is difficult for me to imagine that she will find peace and solace in this life.” 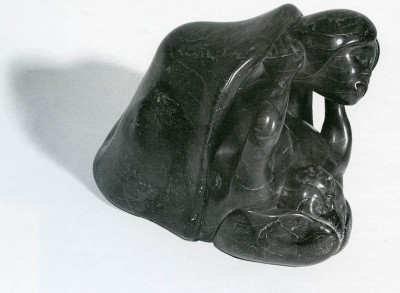 An untitled carving by Jobie Ohaituk from 1997. (PHOTO/ IAF)

In May, 1998, nearly a year after his arrest, Ohaituk, who lost his job as bus driver with the Kativik School Board, had pleaded guilty to three charges. One charge involved assault with a weapon. The police report said Ohaituk was leaving church in May 1996, when a woman called him a “womanizer” or, according to other witnesses, a “child molester.”

Ohaituk responded by hitting the woman with a Bible that was wrapped in plastic.

He also pleaded guilty to two charges of sexual assault against minors. The offences took place over a five-year period and involved the little girl who took his bus as well as another victim.

The other girl was also about eight years old when her molestation began at Ohaituk’s home where she had gone to visit his daughter. This victim said Ohaituk stole her childhood away, and started a pattern of abuse by other men later on.

“The facts are almost sickening,” the Crown prosecutor said to the court. “To see what was done to these girls, and particularly at their young age.”

Yet, according to Ohaituk’s pre-sentencing report, he was “surprised” that the girls had disclosed the abuse.

Ohaituk dismissed the content of the report that found him to be self-centered. He said the girls had never defended themselves against his advances. He also admitted to being sexually attracted to his young victims.

The report concluded he was a sexual deviant who should be sentenced to a jail where a program for sexual offenders is available and mandatory.

But, speaking in Inuktitut in his own defence in Inukjuak, Ohaituk said he had written to the victims to apologize. He added that his family suffered intensely when he was removed from the community for six months after his arrest in April 1997. He said he would accept the court’s judgment, but that he didn’t know how his family would manage. 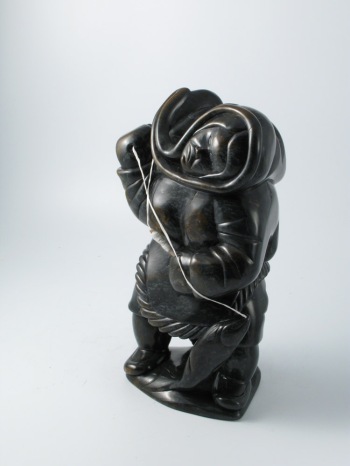 “He wants to forget the past,” said the interpreter, paraphrasing Ohaituk’s words.

“I am sorry for the things I have done,” he said. “I have told myself that I would never do this again.”

Ohaituk, dressed in work clothes, listened as Bissonnette hands down his judgment. Bissonnette first tried to explain the purpose of sentencing.

He said it was both a punishment for the offender and a deterrent to those who might act similarly. It could also assist healing.

“A sentence should help an offender change his ways and return to the community as a full member,” Bissonnette said.

Often, the offender’s absence could also help the community’s healing.

Bissonnette added that it would take a long time for Inukjuak to heal from the damage caused by Ohaituk’s actions, although he did acknowledge that Ohaituk had experienced a difficult upbringing — his father died and his mother was hospitalized in the South for five years when he was growing up, leaving him with an aunt who had many extramarital affairs.

But Bissonnette said in such cases of child abuse, a jail term was appropriate, as a clear warning and an example to others.

On his return to Inukjuak, Ohaituk would also have to observe a three-year probation. He would also be prohibited from going to any daycare, school or playground, unless accompanied by another adult.

Ohaituk, who had just smoked a casual cigarette with his wife outside, was led off to jail.

Many years later, we got a call at the Nunatsiaq News from an art dealer asking that my story about Ohaituk’s court appearance in 1998 be removed from our website because it could discourage art buyers.

Although many stories from that period have disappeared, you can still read this one here.