In my last blog post, you heard about some of the images on building walls around Iqaluit that show representations of people I have known or written about, such as singers Susa Aningmiuq and Jimmy Ekho. And, on another wall-image, there’s Nunavik singer and songwriter Charlie Adams, who died in 2008.

Charlie Adams as you walk towards Arctic Ventures. (PHOTO BY JANE GEORGE)

Charlie was 55 when he died in a Montreal hospital from complications related to injuries he had suffered in an accident in 2004.

But, before that, over a 30-year career, Charlie played at numerous music festivals throughout the eastern Arctic. He also toured the United States, England and the Netherlands where he performed for Queen Juliana. Adams was generous with his talent. Travellers (me, included) stuck at Iqaluit’s airport back during a February 1994 blizzard can recall how Charlie lifted our spirits by pulling out his guitar and inviting everyone to sing along with him in a version of his most famous song “Quviasupunga” (I’m Happy). You can hear that well-loved song here.

In 2003, Charlie also played and panhandled for spare change in Montreal, where he lived homeless and slept on the streets. Then, in July 2004, he suffered a near-fatal accident when a car drove over him while he lay in an alley. “I was lying there sleeping. The first wheel passed over me and I started yelling to the guy because I’m in pain and all that, and the second wheel stopped right on top of my stomach,” Charlie told me by telephone from his hospital bed in Montreal following the accident. “The first wheel broke my pelvis, and my intestines went out through my rectum and my stomach.” I think of Charlie, the gentle, talented singer, on my walk to work.

Then, there’s a striking mural, painted by Craig Clark, on the wall of the late Iqaluit Mayor Jimmy “Flash” Kilabuk’s house. I remember when it was mounted in 1998 just before the Arctic Council ministerial held that year, an informal get-together in the Anglican Parish Hall that was quite unlike the security-laden, heavily scripted event of this past April.

The three huge panels — eight feet by seven and a half feet — feature portraits of famed Baker Lake artist Jessie Oonark, Pond Inlet’s long-time priest and historian, Father Guy-Marie Rousellière, and community leader Abe Okpik. Okpik, who died in 1997, was active in getting relief to Inuit in the 1950s and 1960s. He also worked on Project Surname, which brought names, instead of disc numbers, to Inuit in the eastern Arctic. When I spoke to Okpik in the early 1990s, he gave me a leather duplicate of the E-disc he had worn. I recall he was gracious and took time to explain everything to a young reporter, who didn’t then realize what an historic role he had played in the eastern Arctic. Thank you, Abe, for your time. It was an honour to meet you.

Ataata Mary, known for his exhaustive research on Inuit history and language, died in a fire in 1994,  two weeks before I arrived  for my first visit to Pond Inlet. I later read many of the works that he had published, and picked up some at second-hand book stores: they’re now at the May Hakongak Library in Cambridge Bay with the rest of my collection of Arctic books. 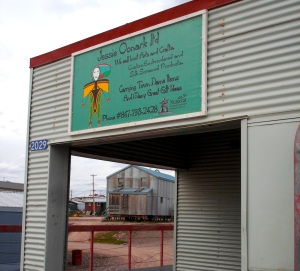 I never met Oonark, who died in 1985, but I spent many hours in the Nunavut legislature during sessions, looking at a colourful wall-hanging that she had stitched of geese going in many directions at once,  which was on display in the chamber. And, in 2009, I visited Baker Lake, where I stopped by the arts and crafts centre that bears her name.

This wraps up my little introduction to the people whose images you can see on the buildings around Iqaluit.