I wanted to finish this post, the fourth in this series, before the April 24 Arctic Council ministerial meeting in Iqaluit — but suddenly there was no time and no mental energy. After the Arctic Council meeting, Iqaluit continued in a state of upheaval: a fire at the Ukkivik residence, then an armed standoff in the Happy Valley neighbourhood (where I was staying, just outside the barricades set up by police,) yet another armed standoff and then a bomb threat at the Nunavut Court of Justice.

But, knowing what I do now,  it was okay to let this post wait: no one in Iqaluit for the April 24 Arctic Council meeting would have seen much of the city — except for the Inuit village erected between the Nunavut legislature and the cadet Hhall, the two venues used that day for events and news conferences. 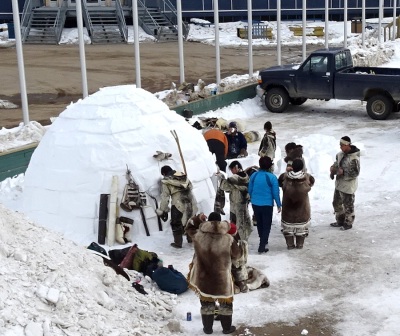 Looking out of the media room in the cadet hall, I could see the Inuit village set up  for the Arctic Council ministerial meeting. (PHOTO BY JANE GEORGE)

So surely, no Arctic Council ministers would have noticed the stencilled likeness of Susa Aningmiuq on the side of the Navigator Hotel (whose windows were unboarded for the dignitaries) as they drove from the airport to their meeting in the Nunavut legislature.

Susa Aningmiuq on the side of the Navigator Hotel. (PHOTO BY JANE GEORGE)

But the artwork on the sides of several houses in Iqaluit always brings back memories for me— because the images feature people I knew — or about whom I wrote, at the very least. Susa, postmistress in Pangnirtung, died in 2001 — but the 1990s song by Susa and her husband Etulu, called Upirngaani, or spring time, was one I listened to over and over again, because it was so cheerful — and easy to understand.

The song’s popularity endures: I heard someone singing this tune recently on a sunny day in Iqaluit. You can listen to it here. On another Iqaluit building, you can see an image of “Arctic Elvis,” Jimmy Ekho, who died in 2008 at 48. 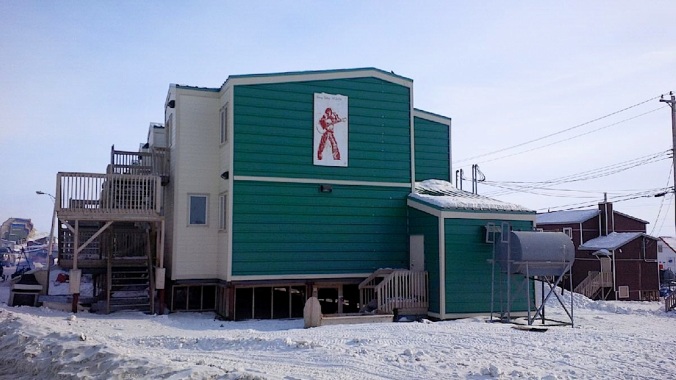 I see the image of Jimmy Ekho daily on my way to work. (PHOTO BY JANE GEORGE)

Jimmy was one of the people I used to visit and chat with regularly. He worked at the Nunatta Sunakkutaangit museum, where I’d drop by and we would talk about Inuit music. Jimmy always sang in Inuktitut and, for his performances,  he wore his signature sealskin outfit. But his best-known song, “Be-Bop-A-Lula,” was not even written by Elvis — actually by Gene Vincent. I remember Jimmy more for his 1993 song “Guti,” a poignant ballad about a young Iqaluit man who died of AIDs. You can listen to it here. 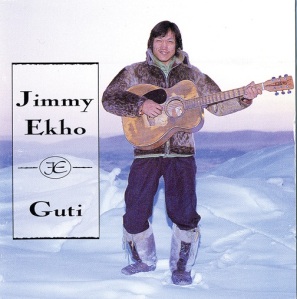 In 2008, Akeego Ekho, his widow, contacted Nunatsiaq News: when she visited the Iqaluit cemetery and her husband’s gravesite, she was shocked to discover that thieves had made off with a piece of carved ivory that hung on the cross marking her late husband’s grave. The inscription on the ivory piece read: “Arctic Elvis. Jimmy Ekho, aged 48, 1960-2008.” Akeego said she spent $300 for the piece. “I really want it back,” she said.

But someone stole the unique carving, which had likely already been cut up into smaller pieces for use in making ivory jewelry by the time she spoke to me. “That person has no heart,” Akeego said, adding that the loss of the ivory increased the grief she felt over the loss of her husband. 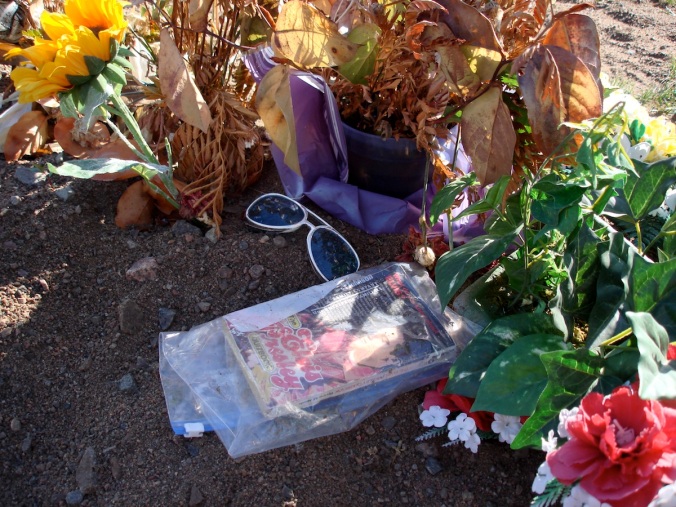 What I saw at Jimmy’s grave. (PHOTO BY JANE GEORGE)