Everyone around the table stopped talking and looked at me in wonder.

My memorable speech in Finnish took place during the second summer I spent as a girl in Finland with the family I think of today, more than four decades later, as my own.

The fact that I couldn’t speak Finnish when I first arrived to stay with them at their farm didn’t matter: I would be able to help my Finnish “sister” practice English.

And Mummo, then the grandmother and matriarch of the multi-generational-family, didn’t care at all if I understood her: she spoke to me non-stop, as you do with babies, as she cooked, worked in the vegetable garden or milked the cow.

The farm where I learned to speak Finnish. (PHOTO BY JANE GEORGE)

I wanted to understand her and the others in the family, but I had no choice but to listen mutely. That is, until that day when suddenly the flow of words around me started to make sense to me and I was able to surprise everyone — and myself — by talking.

“Saanko voita” (please pass the butter) — those being my first, unforgettable two words — showed that my brain had somehow, like that of a young baby, absorbed some important grammatical elements of Finnish.: “Saa” being the root for the verb (receive), “n” the marker for the first person singular, “ko” the interrogative ending, “voi” the stem for “butter” and “ta” the ending meaning “some.”

Of course, I wasn’t aware of any of that. I just somehow knew how to say it, after listening to conversations for weeks and hearing little English during that period.

The summer when I first opened my mouth and Finnish came out marked the beginning of what turned out to be a talkative summer, during which I asked what things were called and constantly added to my vocabulary.

I also figured out more grammatical issues in Finnish. I recall suddenly realizing that “mitä” (what) and “missä (where) came from the same base “mi” with place endings which I would soon see cropping up everywhere attached to nouns.

Harder for me was the realization that “kuka” (who) and “kenen” (of whom) were also the same, but I was on my way towards sliding through the changing roots and multiple cases which, to many learners of Finnish — or similar languages like Inuktitut or Saami, which also use similar endings for possession, movement and location — seem impossible to master.

I worked in Marimekko clothing stores in Finland to improve my Finnish. (PHOTO BY JANE GEORGE)

Verbs also required another way of thinking: for example, to add make “haluan” or “I want” into a conditional verb I needed to tack onto a marker at the end of the root, not put a word in the front to show conditionality — “haluaisin” or “I would like/want.”

I also became aware that there was no future tense in Finnish.

So, I still invented novel ways to talk about the future in Finnish that would leave Finnish-speakers wondering what part of the country I came from because I had little accent but such an odd way of saying things.

I didn’t actually study Finnish grammar until years later at the University of Helsinki, when I took three levels of “Finnish for Foreigners” simultaneously. These courses settled some of the questions I had about Finnish grammar — along with a handwritten book on Finnish that a Swedish-Finnish friend wrote for me to help me understand issues that had stumped her, such as ‘He needed no money (Hän ei tarvinnut rahaa)’, but ‘He didn’t need to borrow money (Hänen ei tarvinnut lainata rahaa)’, which require different grammatical constructions.

To build up my vocabulary I would read simple stories and look up words for hours on end. 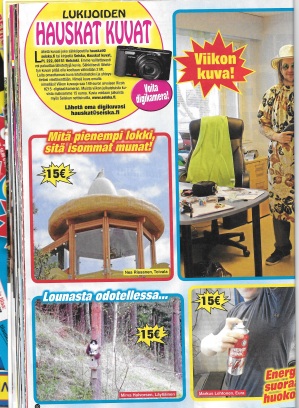 Today, even ‘though I sometimes hear no Finnish for three years at a time, I can still speak and understand Finnish well although I still have trouble with the complex grammar of the written language seen in newspapers such as the Helsingin Sanomat which is different than that of the “puhekieli” or spoken language.

This leaves me stuck reading a lot of magazines aimed for Finns with low literacy — but reading these still helps me (and amuses me).

But it’s a gift to speak and understand Finnish, which to me feels like water bubbling over stones.

While I get to show off my Finnish occasionally at conferences with visiting academics, Finnish has also proven to be useful on visits in Norway. There, many Saami along the northern border with Finland also speak fluent Finnish in addition to Saami. My Finnish enabled me, for example, to spend a memorable evening in Karasjok, Norway with new Saami acquaintances, making jokes in the two languages.

A boat, a lake, sunny skies in Finland. En tarvitse mitään muuta. All I need. (PHOTO BY JANE GEORGE)

And I can relish contact with older Finnish-speakers. This includes listening to songs which my Finnish “mother,” now 89, often breaks into when something happens or reminds her of a song.

Speaking to her in her own language is a gift that I took away from her family,  which offered me a language and world view which I still honour today.

In a future post, I’ll talk about what this language-learning experience says about learning languages like Finnish (or Inuktitut), languages related in the past through the common Uralo-Siberian language proposed by linguist Michael Fortescue.

(Finnish, by the way, is ranked number four amongst the 10 most difficult languages in the world for English-speakers to master before Hungarian, in a list that does not include other similar Uralo-Siberian-related languages such as Saami or, for that matter, Inuktitut.)

Did you read my previous post on Saami, Finnish, Inuktitut, ancient cousins once removed?

4 thoughts on “On learning Finnish”