It was a smooth trip: I left Montreal at 9:40 a.m. and the jet arrived in Great Whale on the tip of James Bay in northern Quebec by 1 p.m. But the cloud ceiling was low, so we made a wide circle over the Great Whale River and then over the long beach that runs up the Hudson Bay coast, north and out of sight.

An aerial view of the Great Whale river at the site of the community of Kuujjuaraapik and Whapmagoostui. (PHOTO/ NUNAVIK-TOURISM)

Rain swept across the runway in Great Whale, the community called Kuujjuaraapik by Inuit, Whapmagoostui by Cree and Poste-de-la-Baleine by Québécois. Some called it the “Miami of the Arctic,” but I was cold and dripping wet after riding to a friend’s house from the airport on her all-terrain vehicle.

My arrival coincided with Quebec election day: Sept. 12, 1994, which saw a Parti Québécois win. In the community’s triple gymnasium, three polling stations were set up, for Cree, for Inuit and for non-Aboriginals, a reminder that these three groups generally live dseparate lives despite being neighbours.

No Cree had voted by mid-afternoon, although the Inuit and non-Aboriginal turnout was good.

In pouring rain, I walked to the band council office where I ran into the chief, Matthew Mukash. He says he’s not voting, although a Parti Québécois win didn’t worry him.

Mukash said a PQ victory could put more focus on outstanding issues between Quebec and the Cree — such as Cree political autonomy and the $13.3-billion hydro-electric complex that its power corporation, Hydro Québec, wanted to build on the Great Whale River.

Mukash and four other Cree were on their way to Nemaska Lake in the heart of the James Bay Cree region. On the day after the Quebec election, they planned to hold a special gathering to talk about their future at Old Nemaska, a campsite more than an hour and a half away by truck and boat from today’s Nemaska. It was a place which Hydro Québec planned to flood for the project: Cree opposition to the project was why their meeting was to take place there.

I decided to accept an invitation to tag along. So I was back at the airport the next morning when the sun was shining — at least.

My Cree traveling companions arrived. They brought their own stoves along with a tent, and our bush float-plane was loaded to the top with gear. After we finally landed  on the lake, I had a moment of uncertainty as I took my bag off the shore to find tent space to sleep in: What was I doing?

There was no electricity, no phones, no way to file a story or even talk to an editor or producer, so I decided the next day to head back to Nemaska, a community that was all sand, towering pine trees and birches by the shores of smooth, blue Champion Lake. 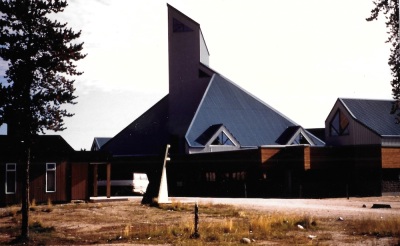 At the goose-shaped Cree Regional Authority headquarters, I ran into Ted Moses, the Cree ambassador to the United Nations. On my first trip north in 1991, I had gone spring goose hunting with Moses and his family. This time, we weren’t talking about the how-to of goose hunting, but about self-determination.

“They say we have no more rights, which is a bunch of bullshit,” Moses said. “Can you hand over such things to an institution?”

Later that afternoon, the truck ride back to the place where we will catch the boat to Old Nemaska felt endless on the grey, bumpy road. Then, there was the boat ride — again — to bring us over the lake to the camp.

I arrived too late for supper but someone offered me a roasted goose breast. I crawled into my sleeping bag on a cushion of evergreen branches to spend a restless night. The tent fire went out, the temperature dropped, and  I was barely warm enough.

In the morning the rising run gave the fog an orange tinge. A boat with a fisherman drifted by. Plumes of fragrant smoke rose from the stoves in every white tent.

In the afternoon, a few long tables were set up in a blue and white tent for the delegates, people of all ages, all Cree.

“The question facing us is can we govern ourselves if Quebec becomes independent? The answer is yes,” Moses told them.

I then headed back to Nemaska, again a three-hour round-trip, to file another story. 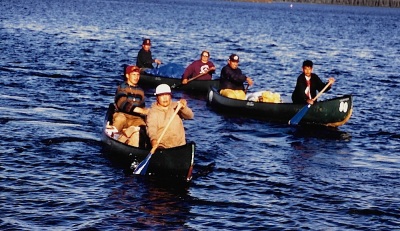 A sunny day for the next day: a line of canoes arrived across the lake from another community, small dots that finally grew bigger, and then landed. The slapping of the water combined with a prayer of thanks for their safe arrival filled the air.

Talks continued: a Cree declaration of self-determination would be the next step.

At the feast that night there was sturgeon, moose and smoked bear paw on the menu. Later the weather changes, and rain and wind battered the tent. No plane could land to take us back.

In the morning, I headed across the lake in the small boat overloaded with people, crouching under a plastic tarp, hoping we wouldn’t capsize, to hitch a ride on a truck back to Nemaska. I was beginning to recognize every turn in that long road road.

In Nemaska for the night, I spoke to Mukash again.

“The power of the mind can make miracles,” Mukash said. “The Great Whale hydro project will never be built. Hydro Québec has made a mistake, although they won’t admit it.”

Mukash sketched a picture of the mind, with the conscious, sub-conscious and super-conscious: it turned out that he was a fan of Swiss psychiatrist Carl Jung.

“They will never build it.”

A delayed plane arrival also led to a talk with Robbie Dick, a former band chief of Whapmagoostui. Cree, he said are “guardians of the land.”

“If you take a plane from the southern part of the United States up to the North, you’ll see the difference between north and south. This excavating, this raping of Mother Earth has to stop.”

Makivik Corp. president Simiunie Nalukturuk and vice-president Zebedee Nungak at the 1994 signing of a $500-million agreement-in-principle on the future construction of the Great Whale hydro-electric project. (PHOTO BY JANE GEORGE)

We finally took off to Great Whale. There, I spent the afternoon walking around, heading down to the river. If that power project went ahead, the river’s flow would be diverted 40 kilometres upstream and the river would be reduced to a trickle.

Inuit had already signed an agreement-in-principle, worth $500 million, to allow the project to move forward — but the newly-elected PQ premier, Jacques Parizeau, put the project on ice in November 1994.

Before heading off to Nemaska with the Cree, I had been planning to fly on to Sanikiluaq to visit a former classmate in the intensive Inuktitut course in Iqaluit. But the yearly season of autumn fog descended and flight after flight was cancelled. So I finally decided to return to Montreal.

The next instalment of “Like an iceberg” goes live April 18.

You can read previous instalments here: