Will I be happy in Happy Valley? Is everyone happy here?

That’s the name of the neighbourhood in Iqaluit where I’m staying. Despite its name, it seems no more happy than any other area in this city, which has known more than its share of change and loss.

And the “happy” valley has now been filled by houses.

As I walk to town, the view on the clear sunny days, which are now the norm for this month of April, includes the  Creekside Village housing complex.

The Creekside blocks, known informally as “White Row housing,” built  back in the 1970s, hug the space between the hill and the road circling the centre of Iqaluit. An entire building burned down in February 2012 and I stood there in minus 50 C temperature until 3 a.m. watching the fire, which took two lives and left 300 temporarily homeless. 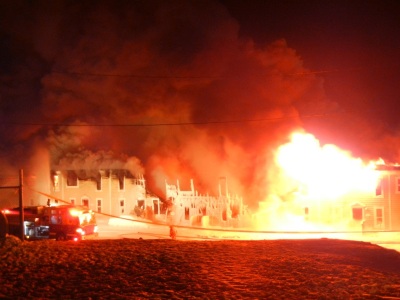 Ash, probably toxic, rained down on me but I didn’t notice.

Three weeks after that deadly fire, grieving friends and family said goodbye to the two siblings who died in the blaze, Andrew Papatsie, 27, and Connie Papatsie, 25, at a joint funeral in the Cadet Hall.

Wreaths of artificial and — rare in cold Iqaluit — real arrangements of flowers overflowed atop a nearby table.

During the bilingual service, retired Anglican minister Mike Gardener tried to comfort the assembled, saying their presence would be a “great help” to the Papatsie family. Hymns sung during the service, “There is a happy land,” “Blessed assurance, “Abide with me,” and “God leads us along,” also carried messages of comfort.

But, during and after the final hymn, at the repeated line of “God leads his dear children along,” many broke down in tears…

It was not easy to cover this event. And the context of the changed city scenery sticks with me as I walk around today. 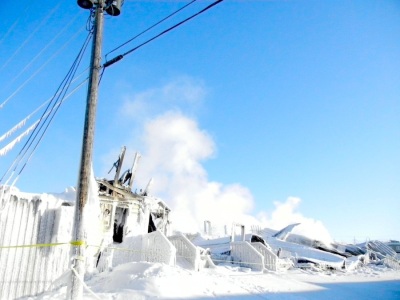 This is how the still smoking site of the Feb. 27 fire looked in early March of that year. (PHOTO BY JANE GEORGE)

Down the hill towards the beach lies the Nunatsiaq News newspaper office: formerly a pharmacy, and a far cry from the cigarette-smoke filled building where the staff worked when I met first them in the early 1990s. 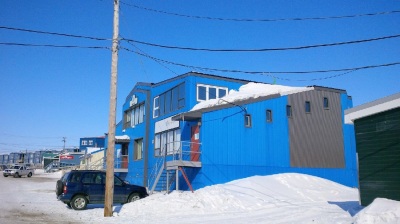 This blue building houses the office of the Nunatsiaq News. (PHOTO BY JANE GEORGE)

But, on this 2015 tour, let’s just backtrack a bit — to a noteworthy Arctic dome, which I forgot about in a previous blog post. Although it’s not geodesic, this dome is probably the most beautiful building in the city today. You will be able to judge for yourself that later when I show some of the other photos of what passes for architecture in future blog posts.

It’s the St. Jude’s Anglican Cathedral, which famously burned by arson in 2005 and was then rebuilt for about $8 million. The new, metal clad dome is much larger — and likely far more fire-resistant — than the iconic, white-domed, wooden building from the 1970s.

And if you’re looking for some welcome spiritual renewal or just something to do on Sunday in Iqaluit, it’s also the place to admire the building’s structure. Inside the nave, where the congregation sits, you can look straight up more than 40 feet high into the skylight.

This is how St. Jude’s looked before it burned down in 2005. (HANDOUT PHOTO)

On Palm Sunday that’s where I end up, listening to songs by the red-amauti-clad Inuksuk high school choir. I’m also in for a welcome surprise: Rev. Gardener, whose voice always manages to be both melodic, comforting and authoritative in English and Inukitut, is serving as minister.

During the service, he encourages children to wave their palm fronds and asks them what animal Jesus rode: not a camel or a whale, but a donkey.

Soon the service is over. It’s back out into the bright light of a cold Sunday and more walks around the city.

You know you’ve never been to Iqaluit/Frobisher Bay when…

Curious about the Canadian Arctic of the 1990s? You will want to read my Like an iceberg series of blog posts. You can find all the links here.